This is a plugin I already released, but for MV. I didn't have to change much, just put th enotation to remove the warning.

This is a plugin for locked content requested unofficially by A-ster that may be somehow used as dlc. Since it doesn't work as DLC for real, I named it FakeDLC.

- Manage switches and variables before entering the game.

- Control locked content with a file you can just send to the client to overwrite.

Add the plugin to <project folder>/js/plugins . Also, create a file, preferably <project folder>/data/dlc.json (you can configure this), in json format or just use the sample one as a base.

On MEFD_Switches, there's two parameters, on and off. The switches with numbers in the clause will be turned on and off depending on what list they are in. They are first turned on, then off, so if you place any numbers repeat on both lists, it will be turned off.

on the MEFD_Variables, there's as many lists as you need, working this way:

A, B, C are variable numbers to set, and "X" with quotation marks included, the value to set in these variables.

- Feel free to modify to redistribute it.

- This plugin comes as is, with no guarantees.

- I'll try to give support about it, but I can't say I will do it for sure.

- No credit required unless you modify it then credit yourself, in other words, no claiming as your own!

- Give credit me as the author of this plugin, I don't mind if you do so in some scene or some easter egg.

- Report any bugs, incompatibilities and issues with this plugin to me, even if you have someone else fixing them. (RPG Maker Forums, through thread or private message, or github)

Q: Why is the name FakeDLC? It just unlocks already present content

A: The request was "A plugin to make it feel like DLC, even if it's just locked content". This plugin just unlocks that protected content, and along the default RPG Maker behavior to keep things together, you can mix it to make it a actual DLC plugin.

I made it so it so you can scale it to a proper dlc system, but you may want to use a more complete plugin for this instead 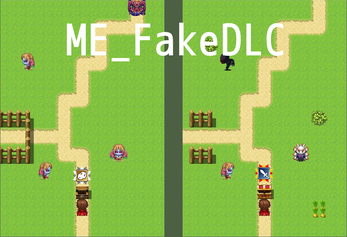